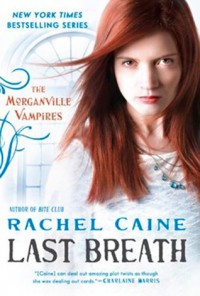 “There is a certain freedom in giving up all hope. One is no longer bound by the cords of dread or fear; you simply move toward the inevitable without thinking on the consequences.”

Same as usual. It is a beautiful sunny day in Morganville and everyone thinks that things are finally looking up. But they were wrong. Because after the sun came the rain and it didn't stop.

Claire and Shane were with Myrnin when he had to go on some official business so they accompanied him which wasn't a good idea because they overheard something that was a big secret. And Amelie concluded that they should be silenced. Myrnin pleaded for Claire's life and Amelie granted him the favor but only if he personally kills Shane. Myrnin tried to tell the Founder that that would ruin Claire but she wouldn't listen. So... Myrnin almost did kill Shane if it weren't for Oliver.

Needless to say that Claire swore never to forgive Myrnin which broke his heart (yeah, he has one. told you).

The thing which was a big secret was that the draugs are coming. They are some kind of mythological creatures that live in the water and they feed of vampires and they are almost impossible to kill. (I find it quite stupid, really. They came to this small town in the middle of nowhere where it rains twice a year and where there is no running water around. They came with the rain believe it or not. And they somehow made it rain all the time so they can survive. Unlikely, miss Caine but who am I to judge it, right?)

Anyhow, the vampires are packing on Amelie's orders. She plans to run from these creatures. And destroy a whole town and all its people in the process. You can see how humans are not very fond of this wise idea.

Claire gets herself killed. Yup. Killed. But the house saves her only differently than it did with Michael. Now, the only question is will they be able to restore her or will she fade away?

I gave it four stars only because I loved the Series so far. If it would be a stand alone and I would read this book first I would give it 2.5*.

First of all, how is it possible that Claire saves this town full of vampires and smart and capable people, again? She saves the town again. Unbelievable. She should receive a trophy and a perpetual saint seat somewhere on the throne of that in-the-middle-of-nowhere town. I can't believe and refuse to acknowledge that a seventeen year old human is capable of saving a whole town and all of its people and all of the vampires from total annihilation and destruction more than a dozen times so far.

Next. Claire and Shane just don't click. Yeah, the author is really trying to make their relationship special and there are a few instances where Shane tells Claire how she is his life and all that. But the rest of the story? Complete lack of chemistry and interest. I honestly believe that Claire has more chemistry with Michael who is really head over heals in love with Eve btw. They just don't work for me.

I always ramble on and on about Myrnin. And guess what? I was right all along. He is awesome. And in love with Claire. He is prepared to give his life and face any danger so she could live. He saved her. Again. He brought her back. He brought her back from the dead. And he offered her a choice to be a vampire. He wanted to give her an eternal life. He wanted to give her a chance to be with him. I thought, oh goodness, shivers down my spine, this series is finally going the right way. Guess what? SHE REFUSED. That bitch. Not only did she refuse but she didn't even thank him properly. She acted as if though it was his job to risk his life for hers. REALLY? How selfish do you have to be? I am so PISSED at her and at the author. And let's not forget in how much denial the almighty heroine of the story really is:

"Claire hated to say it, but she knew the answer, in her heart. “Because he feels something for me, and he wanted to give me a chance to live. Like him. With him. But I refused.”
Shane turned and looked at her, a blank expression on his face that turned quickly into . . . something else. Claire was glad Myrnin had gotten out while he still could. “Great,” he said. “I knew it.”
“It’s not like that. He’s—” She shook her head in frustration. “It’s not like he’s in love with me or anything; it’s more complicated than that. I don’t even think he understands it, exactly.”
“Yeah, he only loves you for your mind,” Shane said..."

The author had the chance to finally twist this series into something memorable. To make it special. To really make some changes. But she stayed with the boring no-chemistry human who almost hit Claire in the last book and who still doesn't appreciate Michael's friendship because he isn't Michael anymore. Oh, give me a break. Self-absorbed, lazy, egocentric, no life bastard. Ok? I don't like you Shane. I really don't.  When will you get in that thick skull of yours that Michael is your only male friend you got left? Jackass.

"Michael stood up. It was a vampire move, sudden and shocking, and in the blink of an eye, he was looming over Shane, and he had Shane’s T-shirt bunched in his fist, lifting him half out of the chair. “You’ve got to be fucking kidding me, Shane! Have I ever not had your back? I had your back when you tried to kill me. I had your back when you were locked in a cage. I’ve had your back every single time. What do I have to do to make you believe I’m on your side, be an asshole like your dad? Well, I can do that. Maybe if I punch you a few times, you’ll be convinced.”

The storyline is interesting despite the stupid-ass crazy creatures that made it rain daily in the middle of the desert. The author is well versed in mixing mystery with suspense and hard action. Which makes it a page turner for the reader despite all the things we don't like about it. Like how a dozen books in a row we still read about Michael's bad need of drinking blood and how it is good that it is sports bottle he is drinking from and they can all pretend it is something else in there. Oh, come on. He is a good vampire. Never harmed anyone. He is thoughtful and considerate. And you still can't possibly stand the idea of him drinking blood from a bottle. Eh...

All in all, the ironic humor is the best part of every book so far. There is no sex. The romance isn't heartbreaking or make-my-blood-go-faster type. And I don't agree on the couples. Amelie isn't portrayed as strong as she should have been. One of the most original characters are Oliver and Myrnin. Oliver whos is a constant puzzle and Myrnin who is constantly unbalanced. I honestly hoped this Series will take on a different turn by now. And that it will get better. But it hasn't. And I fear it won't. I'm just so freaking sorry for all the wasted potential.

“Ahh . . . maybe we should be going,” Shane said. “Ditch the shoes, Eve. We’ll be running now.”
“I love these shoes!”
“More than your circulatory system?”
Eve silently kicked off the stilettos and backed up."