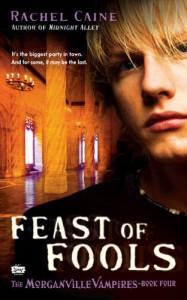 "No reason. I like my ladies with a pulse.”

Sooo.... wow... again (don't hate me) I've read it in one sitting, I can't help it. Once you start it sucks you in and just when you are about to take a break, something outrageous happens and you sit your lovely butt back down and continue with the story.

I'm not going to trouble you too much with the plot as to not to reveal too much of the storyline.

Mysterious Mr. Bishop has arrived to town and he has brought two of his lap dogs with him, Francois and Ysandre (bastard and a bitch). He claims to be Amelie's father and sire. Unfortunately for all the Glass House residents he is nothing like his daughter. He is a vampire of the old world and of the old habits. And he has come to Morganville with an agenda.

Another addition to a small town Morganville are Mr. and Mrs. Danvers or if you will, Claire's parents. They have abruptly decided to move and didn't tell Claire until the deed was done. Now, Claire has another worry on her mind since her parents have done this blindly, they didn't know about the vampires until they moved in. Another surprise was that the house they bought is one of the Founder houses.

Mr. Bishop, Amelie and Oliver are in a fight for power. Others have no chance against them. So, the winner will be the one with the most allies and the best strategy.

Feast of Fools is an event that will change Morganville's history and put all of its residents in danger.

Claire has much to deal with as with the approaching Feast, as with the cure for the disease, as for her parents, as for Myrnin and most of all - Shane. Shane has found himself in a dire situation. Apparently, Ysandre really likes him and since she is a bitch with a capital b (more than Monica, then you know I'm serious), she will use force and violence to get what she wants.

The author, Rachel Caine, really knows how to surprise me with all of her unexpected twists and turns. Usually, I can easily predict what will happen but here I'm lost and that is absolutely amazing. It gives me a thrill I haven't experienced in a long time.

I like the storyline and I love/dislike some of the characters. I already summarized the storyline so there is not much more to say if I don't wish to tread into the spoiler area. All I can say is read it, I personally guarantee you will enjoy it if not fall in love with it.

The characters I love in this book are Eve, Richard Morrell, Oliver and Myrnin. The other main characters have disappointed me, some just a little, some seriously... The ones that I dislike are Claire's parents, Monica Morrell, Ysandra and Jason.

The characters I love.

Eve. I do think she is the real star of this Series so far. I already wrote about her before so I'm not going to be so detailed here. Let's just say that I can relate to her the most and I believe she will remain strong and confident in the future. All that she's been through since her fifteenth birthday has made her into a seriously mature ass-kicking coffee-loving person.

“I'm gonna kill him," Eve said, or at least that was what it sounded like filtered through the pillow.
Stake him right in the heart, shove garlic up his ass, and-and-"
And what?" (Michael)
When did you get home?" Claire demanded.
Apparently just in time to hear my funeral plans. I especially like the garlic up the ass. It's...different.”

“Maybe I should, I don't know leave? Because this is starting to sound like one of those reality shows I don't want to be in. Maybe you guys want to take turns in the confessional booth.” (Eve about Claire and Shane)

Myrnin. I also wrote about him already so check my previous reviews. Let's just say he is an old, hot vampire with a disease that is making him unstable. He can be the best genius scientist and a gentle person but he can also turn into a lethal predator. His intelligence and his wickedness never seize to amaze me.

“That's brain tissue. How can you-?" Claire shut her mouth, fast. "Never mind. I don't think I wanna know."
"Truly, I think that's best. Please take it." He showed his teeth briefly in a very unsettling grin. "I'm giving you a piece of my mind."
"I so wish you hadn't said that.”

“Bishop was all done with the witty converstaion. "Will you swear?"
And Myrnin said, shockingly, "I will." And he proceeded to, a string of swearwords that made Claire blink. He ended with, "--frothy fool-born apple-john! Cheater of vandals and defiler of dead dogs!" and did another twirl and bow. He looked up with a red, red grin that was more like a leer. "Is that what you meant, my lord?”

“[Myrnin to Claire about their costumes of Pierrot and Harlequin, respectively]
"Don't they teach you anything in your schools?"
"Not about this."
"Pity. I suppose that's what comes of your main education flowing from Google.”

Richard Morrell. Surprisingly, he is a good guy and a good police officer. He cares for his family, he knows Monica is disturbed but he cares for her just like any loving brother would. Besides that, everything he does is for the good of the town and its people. He has shown kindness and willingness to help. He will help Claire many times simply because he thinks it's the right thing to do. I like his moral and his sense of duty.

„Good question,” Richard said. „I guess I want a nice girl who can cook, likes action movies, and looks good in short skirts. But I'll settle for you taking the chain off the door and letting me in.”

Oliver. I know, I know, don't judge just yet. He is a bad guy, opposes Amelie, apparently killed Michael and tried to kill Claire. But! I said in this book. Meaning, in this sequel he and Amelie have the same adversary and he will show his better side to us. And let me remind you that he has come to Claire's help in the past and he always listens to what she has to say (and thumbs up for that for she can be annoying). Imagine centuries old vampire who is dictated by a sixteen year old who only recently learned of the vampire world. Yeah, put yourself in his position and then judge. If you look at it from that perspective you will see that he was kind and helpful to Claire many times before as he will be in this book as well. He will save her life and that is something you don't ever forget.

Stay home tomorrow. Lock your doors and windows, and if you're a religious person, a little prayer might not go amiss.”It was such a startling thing for him to say that Claire almost laughed. „I'm supposed to pray? For who, you?”Oliver didn't blink. „If you would,” he said, „that would be comforting. I don't think anyone's done it in quite some time.”

Claire. STILL repeating how she is sixteen-nearly seventeen and not a child. Still annoying and puts herself in harms way on purpose.

Shane. WTF? Really? Some nasty bitch makes you her dog and you act like it's okay because there is nothing you can do about it? And you won't even speak of it with your girlfriend who you (oh dear lord forbid) don't even touch as you should because she is too young (a year and a half difference -.- ). But in his defense, he is still funny.

„Do we have a choice?” Shane asked.„Don't think so.”„Then screw it. I'm getting tired.” Shane yawned. „Let's go get eaten. At least then I can get some sleep.”

Michael. I love you man, really do, you are my type of a guy but HOW could you possibly invite Monica over Eve without explaining anything to her? Did you really think she will just stay at home and cry her eyes out like a total girly girl? Grow up.

Amelie. Supposedly a bad-ass-all-powerful vamp with a cold and retained behavior. But when her daddy strolls into town she backs out. Myrnin really described her as she is "... Amelie isn't a brave woman...".

Claire's parents. How stupid do you really have to be? They crossed all lines.

Monica Morrell. The same bitch as she always was. The one thing I especially hated in this book is her humiliating Eve on campus after she's been through a tough time that involved her family.

Jason. Eve's brother is a character I long wished dead. I am surprised no one separated his greasy head from his body yet. How much more shit does he have to do to finally get punished for his wrongdoings?

Ysandra. ARGH, KILL HER SOON or I will. I hate, despise with all my being those types of females. Not even Monica is that bad. Ysandra is the lowest of the low among the last circle of hell. Her behavior, attitude, wear, make-up, voice, language, actions, venomous smiles... most of all, forcibly stealing someone's boyfriend through threats and violence... CAN'T STAND HER.

STILL NOTHING between Claire and Shane. No, we must wait. I promised your father. No, you are too young and I'm too experienced (really, come on) to fall under temptation, no, don't take your pants off 'cause I won't be able to resist or stop with the sexy noises I'm leaving the room so I won't hump you.

It's becoming too silly, really. Only a year and a half difference. Not twenty years. Dear lord enlighten our dear author on math and youth. Thank you.