Interesting beginning of the Series for young adult... 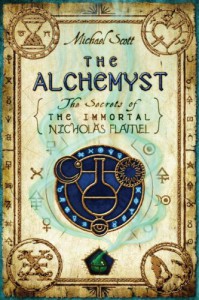 "The truth: Nicholas Flamel was born in Paris on September 28, 1330. Nearly 700 years later, he is acknowledged as the greatest Alchemyst of his day. It is said that he discovered the secret of eternal life.

But his tomb is empty.

The legend: Nicholas Flamel lives. But only because he has been making the elixir of life for centuries. The secret of eternal life is hidden within the book he protects—the Book of Abraham the Mage. It's the most powerful book that has ever existed. In the wrong hands, it will destroy the world. That's exactly what Dr. John Dee plans to do when he steals it. Humankind won't know what's happening until it's too late. And if the prophecy is right, Sophie and Josh Newman are the only ones with the power to save the world as we know it.

And Sophie and Josh Newman are about to find themselves in the middle of the greatest legend of all time."

The main characters are fifteen-year-old twins Sophie and Josh Newman who are as normal teenagers as you can find them. But! They aren't, of course. They are a part of the prophecy which foretells the saving or the ending of all mankind. They will find themselves mixed in a battle between two powerful alchemists and wizards, Nicholas Flamel and dr. John Dee.

Their lives will never be the same after that. Nicholas will recognize them as twins from the prophecy and he will ask for their help. Since the Book was taken and his wife Perenelle was kidnapped by John Dee, the world as we know it is in grave danger. The Old Race is trying to eradicate the mankind and once again rule the planet. What Nicholas believes to be true is that the twins have the power to stop the Dark Old Ones. The problem is that they are short on time.

And here we start with something that has been bothering me a little. Various characters and objects start to appear from all the different myths and legends from all over the world. We encounter the terrifying Scottish crow-goddess, the Morrigan; the three-faced Greek Hekate; the powerful Egyptian cat-goddess, Bastet; and Scathach, a legendary Irish woman warrior and vegetarian vampire. And there is a mention of Atlantis, the Excalibur etc. The worldbuilding itself is interesting but I think that there is a little bit too much of everything.

I commend the idea of using these characters and teaching teenagers a little bit about everything and making them interested in folklore and myths of various different nations but I think that there is a little bit too much of it. It seemed as if though the author tried to use everything he saw as popular and entertaining. What threw me off balance was the usage of Excalibur to kill Hecate and then mentioning how they all lived before in Atlantis. Perhaps this annoys me because I love myths, goddesses and legends and I know quite a lot about them and to see them all in here cramped in 200 and sth pages seems like blasphemy.

The storyline was quite amusing if you exclude the all annoying twins. They were so difficult to bare sometimes that I wished for more adult characters. And that doesn't happen so often with me. I like young adult books. But the characters in this one just seemed so forced in their naivety and immatureness that I wanted to strangle them myself.

All in all, this book has potential, interesting storyline, amusing development and I hope the sequels get better. What I should mention is the fact that the story in the first book happens all in all among the course of two days only.