Looking towards the future ! 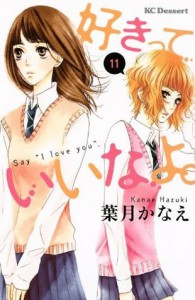 The beginning of the third and final year. The main preoccupation for the third year students are college applications or job hunting. Everyone must decide what they wanna pursue after finishing high school. They will either apply to college or they will start working. Mei and Yamato haven't decided what they want to do yet. One day Yamato takes Mei to the library to browse through different books to see if something will spark his interest considering his future path. Upon leaving they spot a little girl outside all alone and crying. Mei approaches the girl called Hiro-chan and befriends her. Soon after the little girl calls Mei bigger sister and doesn't let go of her hand until her older brother, Aoi Ren didn't pick her up.

Two new characters appear in this volume. Aoi Ren and Rin, twins, a brother and a sister. Similar faces and hair but different in height and build. Ren we've met at the beginning when he lost his little sister and we meet him once more in the gym where Mei decides to go to lose weight. I know, she is as thin as a paper but yeah well, she wants to be perfect for Yamato. So she starts working hard and visits the gym regularly. Kai gave her a coupon for one day trial and then Ren gave her a bunch of coupons as a thanks for keeping his little sister safe. Mei is working hard so she could see Yamato on Valentine's day without having to think about her weight when they will be alone. Needless to say that Mei did achieve her weight limit and she looked super cute blushing in Yamato's room ;)

Meanwhile, Megumi also regularly visited the gym where Kai goes. She wanted to become stronger. And even though they keep saying mean things to each other, they have a special spark among them. Kai maybe just what Megumi needs to get down to earth... Or a rival. Rin is Ren's twin sister and a model. She is very tall and a new big hit on the scene. So big that Megumi feels her impact and has doubts about herself. The situation gets worse when Rin starts to like Kai and asks him out. Ren and Rin have started to go to the same high school as everyone else so we will be seeing more of them.

College and future. Already we see indications and resolves of everyone's interests. Megumi decided to go abroad for a while to study languages so she could apply to a foreign college after high school. Aiko wants to go to the beauty business. Mei seems to like the position of a teacher. She even sets appointment through Ren to visit Hiros's kindergarten for a day. Yamato is perhaps the one most set in his way.

"Mei: That album you gave me, I look at it every day. Yamato's feelings reach people and people return those feelings to you. Only Yamato... can capture everyone's smiles. When I look at everyone's faces captured in those photos, they're laughing faces. I think "Only Yamato can make people smile like that." You're so loved."

So, indication on what will come along in the next volume which should be available in the winter of 2014. Two love triangles emerge. Yamato - Mei - Ren & Megumi - Kai - Rin. I really don't want to see Yamato and Mei fight or doubt each other. Not when they are finally fully enjoying their love. I only hope if it comes to that, it will also get resolved in the same volume. They are such an adorable couple. Nothing must brake them apart.