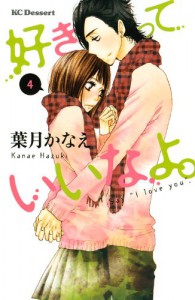 The greatest obstacle so far is threatening Mei/Yamato relationship.

Yamato accepted Megumi's offer to start modeling with her. Mei, Asami and Aiko accompanied them on the set. Yamato and Megumi were doing a theme 'lovers on a date' and they were so natural at it and they looked so good together that Mei felt totally left out. She felt inferior to Megumi and started having doubts about Yamato and their relationship. As the shoot was a big success, Yamato got a chance to continue with this job and he took it. Mei was supportive on the outside but on the inside she never felt more alone. Yamato continued working with Megumi and as they worked long hours, Megumi took the opportunity to invite Yamato to her place for dinner because she "made too much for herself". Yamato didn't tell Mei about it. Or about every other evening he spent at Megumi's place. Mei felt lonely because she barely got to see Yamato at school. She started closing up again until Aiko put her in her place and made Mei tell her and Asami what bothered her. When she told them about rumors involving Yamato and Megumi, Aiko gave her a good advice:

"I don't think it's a bad thing that you're worried about it. It's like your next step is to set over the wall and the fact that you're hitting that wall definitely means you are progressing. I don't know how many walls I have crumbled...
Did you know that if you don't express what you think, nothing will change?"

Mei took a lot of courage to walk up to Yamato in the hallway during a break and amidst all of the students she pulled him down and wickedly kissed him. Even though she did it, she still left him standing there with tears in her eyes and a question in her mind:

Next day everyone saw the interview in the magazine where Megumi clearly states how much she wants Yamato and how close they are. When Mei saw that, she couldn't handle it so she left home. Aiko who has proven to be a true and sincere friend to Mei, took matters into her own hands and approached Yamato about it. She gave him a piece of her mind (rightfully deserved if you ask me):

"The truth doesn't really matter. Do you think it's okay to have the person most important to you think that way? What if it was the other way around? Tachibana going to some guy's house and you didn't know about it... Would you be fine with that?"

"Please make sure you treat your girlfriend differently than everyone else, okay? Nothing makes a girlfriend more insecure than a boyfriend who's kind to everyone."

Yamato realized his mistake and rushed over to Mei's place. He told her the whole truth and begged for forgiveness even though there was nothing going on between Megumi and him. Amidst their conversation, Mei's bracelet broke apart. Regardless, Mei accepted his feelings and told him she loved him (I never thought I'd live to see it). Yamato went inside her place since his shirt was wet and as they were in Mei's room (he shirtless) things got pretty heated up until her mom came home. Yamato told Mei's mom the truth about Mei and how others saw her. It made Mei's mom extremely happy.

Yamato quit modeling after that. He realized how he made Mei feel and how miserable she was with his behavior so he decided that she was the most important person in his life.

"Yamato: Although she has a habit of telling others how it is, she has a hard time opening up about herself. I want her to talk to me and I want to treasure her feelings.
Megumi: I don't understand. How can you throw away a good career... all for one person?
Yamato: Because I was doing it for the person I love, I was able to accomplish what I did."

At this point, we have one more new character joining in. It is Takemura Kai, Yamato's friend from middle school who transferred schools because he was severely bullied. Now he is back and with a lot of muscle on. He visits Mei's bakery and is charmed by Mei's Land keychain that now holds a couple's ring on it. They become good friends and Mei gives him one of the best advices ever regarding his idea of revenge on his former bullies:

"Only hatred is born from hatred."

As new school year starts, Aiko, Yamato and Mei got to be in the same class but Asami was separated and placed together with Megumi. Mei promised Asami that she will always visit her during lunch breaks so she doesn't need to worry about anything.