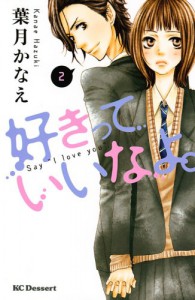 The heartwarming story of Tachibana Mei, a solitary girl and Yamato Kurosawa, a popular boy progresses in a very good direction. Mei has accepted Yamato as her boyfriend but is still very shy around him.

Mei, Yamato, Asami and Nakamishi take a trip to the seaside together. While Asami puts on a very small bikini, Mei shows up with a full body wear and she doesn't know how to swim. That doesn't stop Yamato at making his moves towards her even though he knows a slap will soon follow. Mei, drifting at sea, remembers her father. He always stopped her from going to trips to the sea or water because he was scared for her. She didn't know that until he was on his death bed. This episode was so sad that I even prepared tissues for just in case. Mei always thought he was just strict but when she learned that he was just being overprotective, it was already too late. As she was remembering this, she drifted too far and Yamato had to come to the rescue.

That evening Mei slept (only slept) with Yamato because Asami and Nakamishi made plans and fooled them into it. Mei was scared but also grateful for the warmth Yamato was giving (there are some funny scenes there that made me blush and laugh at the same time).

Back at school, Mei finally got to meet Hayakawa Kakeru, Yamato's friend. It's an understatement when I say she didn't like him. When Yaamto was on the phone, Hayakawa offered Mei his specialty, friends with benefits. He even said that sex will make her look more beautiful. Needles to say, Mei deleted his phone number and left the restaurant. The scene which stroke me most in anime as well as in manga was Yamato's reaction. He attacked Hayakawa, punching him in the face, while saying to him:

"Mei isn't just some girl. Mei is mine alone! You bastard !!"

After the incident Yamato went to Mei's place and apologized. When she saw he hurt his hand on her behalf, she was tearful and grateful.

Hayakawa Kakeru's behavior is explained soon after. His troubled past with his strict upbringing and his need to sleep with women so he would feel warm. He has so many women in his bed, he doesn't even remember their names. And all through this, there was always one girl that made him bento's and looked after him, his childhood friend and his classmate, Chiharu. After one painful lesson which lends him in the hospital, he realizes just how much Chiharu means to him and Chiharu is given a great advice just before that:

"Mei: I don't think having sex early in the relationship means anything. I think that to reach that we have to first understand each other, and wait for a time when we've figured out all our problems, and then I want the best round of sex ever."

At the end of ch.8 we hear Aiko's open declaration of war on Mei. It seems she just can't let go of Yamato even after his relationship with Mei which has lasted for 6 months so far. Aiko's past is also explained.


Difference from anime is greater at this point. In anime we don't see the seaside episode and their first night alone together. In anime their first night will be at the Land. The matching bracelets Mei and Yamato got at their trip was showed in anime as Yamato's gift at school while Mei was looking after an abandoned cat. Which brings me to the point of that cat. In anime there is only one that is there from the beginning while in manga there are four that only come into the story after Yamato and Mei have been going out for half a year. Also, Hayakawa Kakeru is a character that isn't shown in anime as much as here and there was no explanation of his childhood. He was shown as a ladies man, but there was no sex scene like in the manga or the hospital scene later on. Chiharu doesn't work in the bakery with Mei from the beginning like she does in the manga.

I'm in love with this manga. On the surface you see an unlikely relationship with the model-like-handsome Yamato and gloomy-introvert Mei who beat all the odds against them. But in the depths this story is about so much more. All the problems that we encounter as teenagers (and even adults) while growing up. Some I've already mentioned in the first volume. Bullying, harassment, prejudices, deceit, complexes... Here we encounter some new. Kakeru and his need to sleep with multiple women per day just so he would feel warm and loved. The problem of belonging and loneliness. Aiko and her need to change everything about herself only to appeal to her boyfriend. And then when he cheats on her, demanding from Yamato to prove to her that she is pretty by sleeping with her. Again with the inability to accept oneself and find flaws where there are none. Aiko lost so much weight she was left with scars on her stomach. Going to such lengths only to make yourself something you're not.

I believe this manga offers amusement as well as advice and comfort. It is a great material for teenagers. The adults can correlate in many aspects as well. The ideal of beauty is always on the menu for discussion.