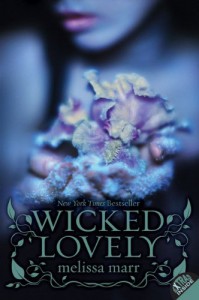 In a world where fairies are not cute, handsome and Tinkerbell-like. Fairies are vicious, cruel, selfish creatures that you want nothing to do with. Even if you see them, pretend that you don't. If they speak to you, ignore them and never ever show them that you posses the gift of Sight.

Aislinn has seen fairies since she was a child. Thanks to her grandmother, she learned to abide by the rules of staying out of sight. Now, she is a normal teenager except for the gift of Sight. She believes that she is shielded from that world. Except, she is being followed. And she was repeatedly approached by a strange fairy asking her questions she doesn't want to give answers to. Once she realizes she has been made and that there is no turning back, she must accept her destiny.

Keenan is a Summer King. He rules over his summer fairies and he is the epitome of summer. For nine centuries he has been looking for a Summer Queen. So far there was no luck and summer is slowly fading away. If he doesn't find her soon, the summer will be no more. When he realizes that Aislinn is the one who will most likely be the perfect Summer Queen, he will do everything and anything to bring her onto his side.

Will Aislinn accept her destiny and sacrifice her old life for this role she was suppose to be perfect for? Will she stay with Seth or will she move on into the new life?


This modern fairy tail is based on a well-known scenario. Good vs evil. Light vs darkness. The core of the story is quite self explanatory. What makes it different is that the author tried really hard to create new unique characters that would boost up the storyline. Perhaps she partially succeeded but for the most part it just looks too forced to me. Seth, Aislinn's best friend and the love of her life is a tattooed, pierced goth who lives in an abandoned train wagons on unused rail trains. He is 18 years old and goes to a clinic because he had way too many sex partners so far. He goes out every night to party and is well known in the city underground. He is Aislinn's confidant and her conscious. She always comes to him with her problems and he spurts out many wise words to her. But other than that he is absolutely bland. No unique personality, no repeated phrases or gestures to be remembered by. He is there to be and look cool, to play as Aislinn's pillar of confidence and advices.

The rest of the characters are similar. No grand depth of unique personalities, no firm explained back stories and no real evil actions that would make them be seen as great threats to humankind. I believe the author should have given more thought on developing the storyline and slowly along with that the characters would grow. Instead she made them like this since the beginning of the story and we should just accept that Seth is cool, Aislinn insecure and Beira evil.

I believe in this story, I believe in Seth and Aislinn and will stick with the series. And I hope it will get better. I think it does have potential because the author knows how to write and make folklore stories come to life. She just shouldn't force the growth of characters.