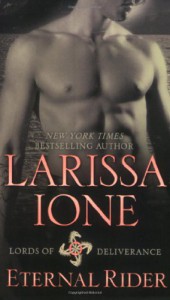 It is a superb book with the only drawback (completely subjective and it is only a drawback in a minor meaning for me) that the hero isn't my type of a man. The rest is awesome.

It is such an engrossing book that I'm starting to believe that it comes with a spell that glues you to your seat until you're finished.

Lords of Deliverance continue the Demonica series storyline. The Four Horsemen of the Apocalypse are the keepers of the seals which if broken will bring about the Armageddon. Sin has initiated that sequence when she started a werewolf plague which broke the seal of the first horseman and now Pestilence is evil and his powers are unleashed. He works on breaking other seals so his brothers and a sister can join him in bringing the hell on earth scenario. They will fight it with all their might because they don't want to lose themselves to their evil demonic sides.

Ares aka War is the second horseman and his seal is in danger. Pestilence is giving his best to break it. For his seal to be broken Ares' agimortus must die. His agimortus was a fallen angel that tried to keep himself hidden from everyone which included Ares himself. In his recklessness he lost his life but not before he transferred his agimortus to a human called Cara. The problem is that agimortus drains the power of its holder and a mere human has only a few days to live. Adding the fact that Ares has fallen for the mortal and that she was bonded by a hellhound Hal and that she has healing abilities towards animals and killing abilities towards humans makes the story all that more interesting.


If you asked yourself if some of the previous characters appear, the answer is hell yes. They are involved in the Underground General Hospital and in the battles that will ensue. Wraith is still a mouthful and I'm still laughing like a teenager when he says something ironic or sarcastic. Can't help it.

Concerning the new characters, they are amazingly put together. I thought that this series may lose its flare comparing to the old series but I was dead wrong. It tells a completely different story but with the old foundation that keeps you safe and comfortable.
Ares is a warrior. All he does is fight and have sex. At least that's what he wants everyone to believe. He doesn't do well with emotions and never sticks with anyone long enough in fear that he will start caring and then that person will die. He still carries the scars from the death of his wife, his sons and his brother. He keeps even his own siblings at arms length. Limos aka Famine and Thanatos aka Death are always there when he needs them but since each of them carry their own curse they don't do well with touchy-feely stuff. Reseph aka Pestilence has always been the laid back brother who kept them together and they will have to accept the fact that he may never come back. Ares is cursed, he can't get near humans or they'll start to fight each other. He owns a horse called Battle that adores Cara before Ares starts to.
Cara is a human female that finds herself amidst the battle to save the Earth. First she is bonded with a hellhound that she healed with her gift and then she receives the agimortus which is slowly draining her life. On top of that she falls in love with Ares, the impossible man who doesn't do compromises or feelings. She has a tough road ahead of her but she is strong. Let me just mention that towards the end Cerberus bonds with her and as the head of all hellhounds he accepts her as their healer. Bloody awesome.

Okay, so he wanted her to toughen up, but her bravery might just veer into foolhardy territory with the wrong person. “You know I could crush you.”
“I know you won’t.”
“Why, because I need to protect you?”
“No.” She poked him in the breastplate. “Because you gave me a pillow.”
He blinked. This female’s logic was whacked, as Reseph would have said. “You’re gambling your life on a pillow?”
“I don’t doubt that you’ll do what you have to do to save the world. You’ll make hard choices. But you don’t grab a pillow for someone you would have no problem killing.”

He framed her face in his hands and held her with his gaze. “Cara, you maneuvered your way into my life. My heart. I always believed that love crippled a warrior, but I fought harder for you than I’ve fought for anything else. You made me stronger. You conquered me, and now I want it all with you.”
She gave him a naughty smile. “Checkmate. I win.”
“Always.” He was lost to her.
And he’d never been so happy to concede a battle.


Now, Thanatos is my absolute favorite. That is my type of a man. All the way to the core. Ares is way too muscle on muscle, very tanned skin and curly hair for me. It really does depict him as a Greek god. But Thanatos is different. Dark, haunted, closed, deadly, more lean in his build and more scary in his behavior. If his story plays out nearly as good as this one, he will step on the first place of my favorite characters along with Bones from the Night Huntress Series and Zsadist from the Black Dagger Brotherhood. I can hardly wait to get to him and all that ink he puts on himself... mmm... mmm...


One more thing I would like to mention is this:
Turned out that Pestilence and his demons had manipulated the governments of Croatia and Slovenia into war after convincing Slovenian leaders that the Croatian military had manufactured and distributed the disease that killed thousands of Slovenians.

This event literally made me laugh out loud until my eyes started watering. I am from Croatia and just to imagine this scenario made me burst into tears from laughter. I know that all of those who aren't familiar with the relationship between Slovenia and Croatia are a little lost here but for us that live here it really is funny. Even though we had our differences we are good to one another and something like this would never come to pass. But I'm certain we are all pleased for mentioning of our countries even though it is in such a manner. Now we can laugh together and keep on reading.