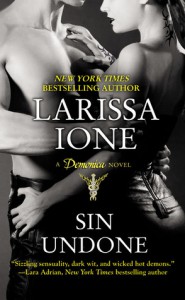 Everything you need in an adult paranormal romance with engaging characters, engrossing storyline, heartbreaking moments and witty comebacks.

Hero and heroine that are far from perfect but that makes them amazing together.


Sin, oh she is as beautiful as a sin and certainly lives up to her name. You want to sin with her and for her. I know I'm a woman but even I fell for her charms. The fact she is so emotionally closed up that she keeps her own brothers at an arms length only makes her that much more fun to figure out. She is a well-trained assassin but when she is near her family she often seems like a child who doesn't do well with... feelings... of any kind.

Conall is a half warg half vampire and a last member of his royal line. His clan awaits his return and ascension to the throne. The last dhampire clan in Scotland is hidden from the world and they have strict rules. Breaking them would mean years of pain or even death. Conall also serves on the Warg Council as the only representative for his dhampire race. He was given a task to stick to Sin like a glue for a week until a vaccine is created and then he needs to turn her in for punishment. She did cause a virus outbreak that resulted in death of many werewolves.

Conall is helping Sin with finding a cure for the virus that kills werewolves. He wants to keep it strictly professional but things don't always go as we want them to. In addition to that, Sin faces a coup de etat from her own assassins. As long as she isn't in her den or in the UGH she is a target for all the assassins. Her assassins want her master ring so they could take over and other assassins received her as a target and they want the money. Being with Conall also complicates the situation. Not to mention that Luc is in trouble and a new species of werewolves has surfaced, feast wargs.

It's a major understatement to say that this is an action-packed dark paranormal romance. It's just doesn't do it justice. We are engrossed into the story from the page 1 and can't possibly put the book down because the world as we know it no longer exists. Everything is at a stand-still until we finish Sin Undone. And I mean, everything. Breathing? Well maybe when we're enveloped with that dark spicy fragrant of Sin and Conall and all of their naughtiness. And then it's panting, not breathing.

„ Ah… damn. Power swamped him as though he’d completed a circuit. She was life. She was death. She was the most dangerous female he’d ever met, and if he was smart, he’d run like hell. Licking her lips, Sin took a deep, shuddering breath that ended with “Release me.” “

„She shot him the bird and started toward the door. “I don’t respond well to orders.”
He was up in a flash, the tube of blood dangling from his arm, and he had her backed against the wall. “Then what do you respond to, little demon? Because right now, I’ve got a mind to turn you over my knee and spank the spoiled hell out of you and see how you respond to that.” Her gasp of outrage was a bright spot in his otherwise shitty day. “Oh, yeah,” he purred, as he wedged his thigh between hers. “You do respond to me. You responded very well to what I spilled inside you.”"

„And then she wasn’t fighting anymore. She didn’t need to. The razor edge of a blade was biting into his groin, and he froze as solidly as an ice sculpture. “Kiss me again without my permission,” she whispered against his lips, “and I’ll geld you and sell your balls to a Ruthanian specialty meats shop. Understood?” “You won’t do that,” he whispered back. “You’d miss them too much.” Sin snorted and made the blade disappear into her pocket as she stepped back. “Men are always overestimating the worth of their genitals.” "


Sin's relationship with her brothers improve with the progress of the storyline. Conall and Tayla have had the greatest impact on Sin, with actions and words. Conall finally took down those walls she surrounded herself with. Even though all of this mushy touchy-feely stuff was going on, Wraith still held on to his spark and genuinely funny usage of language that made me laugh out loud on many occasions.

“Why are you all here?”
“One of Bantazar’s assassins hit you with an exomangler,” Lore said. “He’s dead.” “A lot dead.” Wraith snorted and high-fived Lore. “Massive deadness.”

“So, what happened to Lycus? Where is he?” Wraith snorted. “Between a Chevette and a Mustang. And on the hood of a Thunderbird. And all over the grille of a—”

That doesn't mean that Sin was far behind.... she remains true to herself. The very best thing I like about her.

„Okay dickhead,“she said finally. „What do you want?“
“I want the born wargs to be destroyed. It’s time the balance of power shifted and turneds took over.” “That’s all? Well, good luck with that. I want world peace and for people to stop making bad Batman movies, but guess what, buddy, I’m screwed, too.”


I have to mention that I almost threw this book into the wall at one point near the end. You will see what I'm talking about when you get there. I sincerely prayed that the author, Larissa, didn't follow the example of George R.R.Martin and started offing her characters when they should finally find peace and happiness.
Story ended as it should but it's far from finished. Especially when you have War (oh, yes that War, the rider of the apocalypse) showing up at UGH saying it's far from over. And doesn't that just send shivers down your spine...

All in all, I will say that Sin and Conall had reached a conclusion...
“I’ve got you,” he murmured into her hair. “I’ll always get you.”