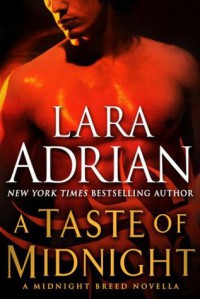 Danika, Conlan's mate goes to Scotland with her baby boy for the holidays. Instead of having a good time she offends the most notorious man in those parts, Reiver. She overheard his private conversation and started to suspect that he was up to no good. He confronted her expecting that she will bow before him like everyone else but she stood her ground and didn't let him intimidate her. The next day she went snooping around his business where she was intercepted by his bodyguard that seemed familiar to her. And he was. Malcolm was Conlan's best friend and once he was rooting for her heart. Soon she found herself sucked into Reiver's shady business and the only one who could save her was Malcom, a man that lost his mate and unborn child to the same man that was after her now.

Absolutely wonderful for a novella. Short, exciting, straight to the point. And it finally resolved Danika's situation. I liked her from the beginning of this series. Beautiful nordic beauty with incredible strength. She never backs down and always looks straight in the eyes of her opponent.

Malcolm is a man on a mission. He was a loner for centuries and when he finally allowed a woman, Fiona, into his life, he lost her and their unborn child to a pimp working for Reiver, trying to kidnap her for blood sport. He was helpless for she went out during the day. All he could do then was to find her body, bury her and seek vengeance. When Malcolm saw Danika 7 months later, his world was turned upside down. And his heart.

Despite my enjoyment of this novella, I couldn't help but notice that the author doesn't do well with time. Let me explain. Danika was Conlan's mate for centuries... they shared their lives, bodies, minds, everything. She even has a son with him. When she lost Conlan she thought she could never move on. And then, only a year later (just one year oppose to all those centuries) she looked at Malcolm and fell in love, she even said that she can't remember how it was to be kissed like this and feel like this since such a long time has passed. Long time? Really? What is a year in their lives? Nothing. I think the author should be more careful with her timing and timeline. Same goes for Malcolm. He loses his mate and unborn child but 7 months later he falls in love again and takes another mate. Sorry, it's not enough time even for regular humans to overcome such loss, much less vampires.