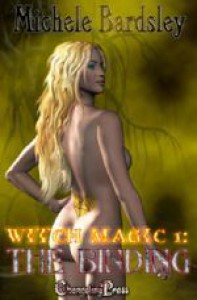 Rosemary is a maiden witch about to marry a warlock named Drake. Their families, Thorne and Dundrury, have been intertwined for centuries. The oldest Dundrury son must marry an eldest Thorne daughter. They have been promised to each other since their childhood and loved each other through their teens. Until one day a deceitful nymph Andromeda seduced Drake and took his virginity. Even though males are allowed to practice sex before marriage, the problem was that Rosemary saw him. And refused to speak with him for three years. Now, on her 21st birthday when they join in marriage she will finally learn what drove him into his betrayal and the price he is still paying.

Although the story itself isn't bad, it's definitely missing a few things. For starters, everything happened way too fast... it practically flew by like on speed or something. The wedding should have been described in more detail and Rosemary's reluctance as well. Her sisters should have been involved more. And the history of witches and warlocks. Not to mention that Drake lacks more detailed description. I did like that not only missionary position was involved but a few other things as well. It most definitely brightened my mood.