Better than the first :) 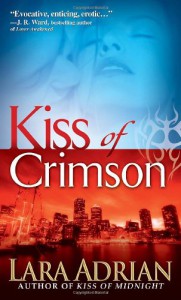 After recovering from the initial shock of the first book being a Black Dagger Brotherhood rip off, I accepted that fact and started to enjoy the series.

Midnight Breed centers around Dante, a fierce warrior haunted by the vision of his own death and Tess, a veterinarian with the special gift of healing. When Dante is badly hurt he stumbles upon Tess in her clinic and without another choice he takes her blood to heal himself. Only when he regains full consciousness does he spots her breedmark and realizes the mess he's made. After that fate takes things her own way. Dante can't stay away from Tess for too long and the fact that her ex-boyfriend was a drug dealer and maker of Crimson, drug that speeds up the process in turning full Rogue, doesn't help at all. We are also introduced with a new character, Chase, who helps the Order in this new drug development. The storyline is consistent. A man behind the drug dealings of Crimson and increased number of Rogues on the street is Marek, Lucan's brother and the enemy that got away last time.

I definitely enjoyed the second book more than first. I believe Dante is much more of a unique character than Lucan. Tess could be a little more courageous but her gift of healing is a lot better than being drawn to vampire lairs like Gabriella's. The one thing that terribly annoys me is how the warriors are dressed and what kind of weapons (and where) they carry. It is almost identical to the Black Dagger Brotherhood. Every time this comes up I feel a stab in my chest and a desire to shake Lara silly. But ok, I have to get over that somehow. One thing I fail to understand is why, oh why, don't they have some human companions in the compound. When something is terribly urgent no one can do a rat's ass about it. No one can do surveillance in the daylight, they can't do shopping... nothing...

I look forward to Tegan's story the most. I hope she doesn't screw it up.