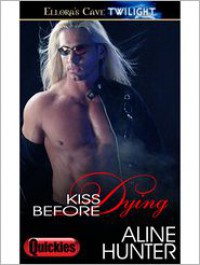 Kiss Before Dying is a short story involving vampire lord Sebastian and his blood slave Katja. Katja has been in his service for ten years and soon she will be released with her memory wiped clean. Since she is hopelessly in love with her Shellar she will risk death only to have him once completely to herself. She disguises herself with magic and accepts her fate, accepting a kiss before dying.

Now, all this sounds good enough but a few things really bothered me.
First, the idea that a vampire lord and master has only one blood slave for full ten years and that the blood slave must be a virgin for all that time. Really? I mean, vampires with all that sexual drive won't lay a finger on the member of the opposite sex through the course of ten years during their most intimate act of feeding? It is really hard to believe.
Secondly, Sebastian claimed that he was in love with Katja since he saw her while in the market for a new blood slave. But he had many women coming to his bed while she was living with him and sharing his bed. How could he make her go through that again and again for years? She also claims that he is so good in nature and wouldn't hurt a fly but he kills each and every woman he sleeps with. No one lives to tell the story. How appropriate.
Thirdly, he knew that she was the one hiding behind the mask and that she was a virgin with her 27 years of age and was never ever touched in an inappropriate way. And yet, he makes her give him a blowjob and swallows every drop in the process while nearly choking to death.

In conclusion, it is hard to believe and imagine oneself in that story. That's why I'm giving it a low grade.