On par with the first book in the series 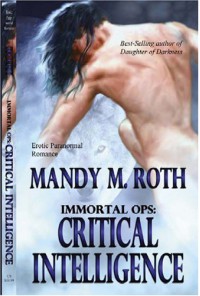 In the second book our lucky main couple constitutes of: Missy, the shadow PSI agent badass kickass strong heroine and Roi, our resident Immortal Ops womaniser and the brother of Lukhian, the leader of the Immortal Ops.

Missy is truly a strong heroine in all meanings of that phrase, she can look after herself, she doesn't just rely on her powers, she can kick ass in the most physical sense possible and still sarcastically engages everyone involved. I have been looking forward to reading about her because she represents a self sufficient independent woman who can rely on her resourcefulness, wit and physical ability, relies on herself to make it through, but she has friends to also share her hardships with (although not all) and she, later on, starts relying on her partner as well.
Missy definitely grows as a character, especially emotionally, she learns how to trust others and how to ask for help when needed. She, in that regard, is a bit better in the strong heroine department than Peren from the first book. Peren didn't have a more gradual progress, she just did 180 and got to her powers and abilities. Missy is the easiest one to relate to because I believe she puts the most effort in her abilities and her gradual growth.

Roi... what to say about Roi. He is the right hand man and a brother to the leader of the Immortal Ops, his quirk is that he is a terrible womaniser and that (in the first book) has even started to affect his work. He bangs everything that moves and doesn't even ask for a name. But on the other hand, he is a good warrior with a good heart and would do anything for his teammates so he has that going for him. And his looks of course. That is pretty much as far as it goes with him. In this regard, I feel like the hero of the first book was more established than this one. It's like this hero here is just here to put emphasis on the strong badass heroine. So I felt his character lacking something. Some more depth.

Missy and Roi as a couple are indeed a good match and Missy's backstory is truly heartbreaking. They had some wonderful scenes and the action was just as good as in the first book. The writing is still excellent and the sarcasm just oozes from Missy which is 50 extra points for this book haha.

For the first book I understand somewhat, it happened quickly, the main couple got the instant mates vibes upon meeting and all of the action happened after the Ops were hired to take her out, so it goes to show that someone else will be doing it when they didn't. In the second book, however, regardless of the fact that someone is now after Missy too, we have certain characters established, we have the world building, it would have been nice to give more time to characters to actually develop. To give time to resolving problems and not having it come to a huge obstacle that immediately gets solved. The action propels you forward but this then doesn't have you maniacally turning the pages to see what happens because you already know.

And in the end I will mention one more thing that I see being written often about. The insta-love mates thing. I do not like it that much, no. I prefer characters being able to choose whom they love and marry without having it being a fate you-must-do-it or you won't have another love, you won't have children, you will suffer and you might die kind of thing. That isn't sitting well with me.
BUT!
I do take it as being a central premise to shifters in this universe the author created so I am not taking down stars because of it. It is a personal preference and the author cannot please everyone. I have taken it as a part of this universe and simply judge based on how it plays out, not the fact that it even exists. If you cannot go past that then it is better not to even read this series. Because everything revolves around it. If you do choose to read it even when you know this fact then don't give this book 2* rating or similar simply based on 'I hate the mates thing, the no choice, insta-love pull the characters have'. It isn't fair to the books and to the author.