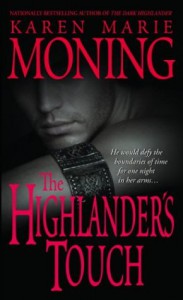 I know, I know. I shouldn't complain too much. This is a historical time-travel romance that isn't supposed to be a masterpiece. Most read these kinds of books, well let's be honest, for the sexy Highlander and the sex.

But I don't care if I sound whiny and/or repetitive. YOU SPOILED MY PERFECT ENDING, MISS MONING !

Now, to explain what I mean by that. It is a happy ending for the couple, no worries there but it's such a let down that I can barely find the appropriate words to write this review.

This book was going to be the one. First two books in the Series were a slow build up, second better than the first in so many ways and the third was building up to be awesome and a true representative of this genre with a good drama which makes the story oh so much more powerful.

And then the author had to take all the drama away in a meaning of taking back (erasing in time) everything bad that happened to the heroine during her short life and making her life peachy perfect from the beginning to its end somewhere in the future.

How can you possibly expect that to make sense??? The heroine Lisa was a woman of a strong and resilient character with a whole lot of strength and inner wisdom exactly BECAUSE OF THE TRAGEDIES that marked her life. She was who she was because she went through more than almost anyone else on this planet. Those events made her a strong female with no fear towards life. Why erasing everything that made her such a person???

From an inventive and fresh story with a strong female character you went to let's compromise with the masses, let's give them all the FLUFFY, TOUCHY-FEELY-CRAP, SUGARCOATED version of life. You made your own book a complete and utter disappointment for any smart and sensible woman out there. I'm so pissed right now...

Other than that though, the story was really good. Karen Marie Moning has an impeccable writing style and even when she's doing something half-assed, she does it better than the most. Her descriptions of sex are especially well written.

In this story, the heroine Lisa is pulled back in time when touching a certain bewitched flask. The flask is a property of the Fae, but Circenn was put in charge of keeping it safe. He put a spell on it to return to him when discovered... he didn't know that the flask wouldn't be discovered all the way up to the 21st century. So Lisa gets dragged through time back to the 14th century right in the room of a certain naked Brude who was bathing at that moment.

Although she finds Circenn attractive and this century not so bad as she would have imagined before, Lisa still wants to return to her time because her mother is dying of cancer and she wants to spend her last moments with her. She will find herself torn between the love for her mother and the love for an immortal Brude Highlander. Her guilt won't let her be happy knowing her mother has no one else to care for her in her last moments...

Adam Black was an ingenious addition to this story. He has fascinated me since the beginning and I was really pleased learning more about him, his history and his character. Also, we get a closer look to the Fae court and the Fae governing. That was also a good filler.

Everything would be perfect if not for that stupid move...

Circenn is someone you will most certainly love...

Her eyes stung from quick tears. It had been her mother's nightly benediction: Sleep with the angels. But then he added words her mother never had:

"Then come back to earth and sleep with your devil, who would burn in hell for one night in your arms."

"Sleep with the angels, my Brude queen," he said softly. But come back. This devil needs you like he's never needed anything before.

"One of the first lessons a warrior is taught is that denial of one's circumstances only results in failure to recognize real danger. And I assure you, Lisa Stone, there is infinite danger in your present situation."

"Aye. Lisa, I'd bring you the stars if it would cease your tears."

One thing I agree with the brute hero the most is in this paragraph:

"He would never understand - not even should he live to be five thousand - why women consistently protected villains. It was simple in a man's mind: Kill the man who tries to harm your own. But women made it much more complex. They held out hope that evil could be redeemed. A foolish hope, to his way of thinking."

Last but not least annoying are the usual stereotypes.

1. A virgin heroine (despite being gorgeous, smart etc.) aka damsel in distress

"She couldn't see the length of it, but that wasn't what made her heart pound. It was the thickness of him. She would never be able to wrap her hand around it."

"She wrapped her hand around him, and, as she'd suspected, her fingers couldn't close."

I'll just say that I can understand why guys have complexes and why their self-confidence is so easily shattered by women. Women, as in all of the females who judge guys based on their love romance books, are delusional when it comes to this cases and live in their own little fantasy world somewhere far far from reality.