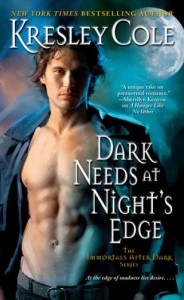 "When I think about kissing anyone, I imagine you. Only you. I can't pretend that this isn't so."
"That pleases me, Conrad. Because I don't want you kissing another woman," she murmured.
"Why?"
"I'd be jealous, wanting to scratch her eyes out for kissing my vampire."

The youngest of the Wroth brothers has finally been caught after three centuries of eluding his brothers. Nikolai, Sebastian and Murdoch have caught him and shackled him in charmed manacles. They believe that their little brother, the one who resented Nikolai the most for turning him without his permission, can be saved from his bloodlust. Conrad Wroth is a vampire that professionally kills and drains his victims taking their memories inside him. His red eyes are a true testament to that. Despite everyone's belief that he is beyond salvation, including himself, his brothers give it a one last go. They believe they can still reason with him and perhaps locate his intended Bride which would turn the odds in their favour.

As the brothers lock Conrad in a remote estate, he starts to see a ghost of a beautiful woman. At first he thinks that his mind is playing his usual tricks on him and that he is seeing someone from one of the memories he took in. But slowly he warms up to the idea that this female only seems to be able to attract his attention and that she can only converse with him. As the time goes by and his bloodlust slowly recedes he starts to enjoy his time with her. They slowly build up a connection telling one another about their pasts. Conrad of his warlord warrior days and Neomi of her dancer (burlesque and ballerina) days.

Between them an obvious bond blooms but not in a blooding Bride sort of way. Conrad suspects that her being a ghost might have something to do with that. Soon enough though he is overcame with rage at the thought of her betraying him and he leaves her. She musters everything she can so she can show him that she isn't some fragile woman but a proud one who deserves his respect.

As their dance becomes more and more tangled, the other dangers that lurk just above their shoulders threaten to take everything from them if they wont give their utmost best to deter it. A deadly dance of life and death.

I finally got one right.

"Immortals After Dark" series is a cure for any kind of headache you might have. The perfect combination of a paranormal romance and a desperate need for a happy ending. The love story in "Dark Needs at Night's Edge" has a slow build-up but the kind that never leaves you bored. It's the opposite. Because of that step by step growing affection you can completely submerge yourself in this book and fully relive the whole story.

Even though, the romance is at its core, this book offers plenty of mystery and action which constantly keeps you on the edge. The happy ending is evident, but that is also one of this books' charms. You are never discouraged by it. You revel in the story and never want it to end. And when it inevitably does, it leaves you happy and grinning.

The only reason I gave this book 4* is that I was little annoyed by the main heroine's constant change of state.

Namely, she goes from a ghost to human and to immortal while dying twice (or exchanging two bodies).

I just thought it was a little over the top and there was no need for that. The story was perfect as it was.

All in all, you can't go wrong with this book. If you are a fantasy or a paranormal romance lover or even an urban fantasy romance lover, you will enjoy this book.

Especially if you've got a thing for

a hot virgin vampire male who is about to be introduced to a world of pleasure denied to him for too long.