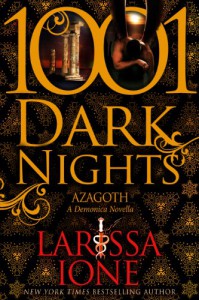 „People in Heaven think you’re a monster, you know.”
“I am.” He pegged her with a dark stare. “Don’t let my calm exterior fool you. There’s a beast inside me that’s capable of horrors you can’t imagine.“

Now, if this isn't enough to take you in, maybe this one will be more down your alley.

"Send someone willing.” He bared his fangs, giving the angel an up-close-and-personal look at one of the things that made them so very different despite their angelic origins. “I’m warning you. Because the next angel who steps through that doorway won’t be leaving. Ever.”

Khm. Azagoth is a Grim Reaper (emphasis on the Grim). He is the embodiment of the plane between Heaven and Hell where all the souls of demons and evil men go. He is the king, the lord, the God of Sheoul-gra. The plane itself reflects everything Azagoth is. And he cannot leave this place. Ever.

He was an angel once, one who was feared throughout Heaven and Earth. He chose to fall so that he could create this place that he now calls home. He was sacrificed "for the greater good". Heaven promised him his realm which will completely fall under his rules. They didn't give him much choice in the matter though. Few months later they revised their contract. They added a rule which states that he must service seventy-two angels per year so that they could give birth to a new race of angels called Memitim. Memitim weren't as strong as angels but they were raised to protect important humans and watch over them. He did what they asked of him, over and over again until there was nothing left in him, not even a tingle of emotion.

The time has come for Azagoth to take back his life. He is done with never-ending solitude. He wants a real mate, one that would never leave him. An angel that he could call his own. No more of those pesky angels who came to him with their noses held high and their legs spread while praying aloud that this will soon end. No more of using him. No more bullshit.

Heaven didn't take his demand lightly. But they had no choice. So the prick Raphael, an archangel who just begs to be killed, chose an angel and gave her "a choice", she will either mate Azagoth or she will suffer the punishment of removing her ability to time travel (which can kill or leave an angel in a coma-like state) and for the end of time do menial tasks that Heaven demands. "The choice" was clear. But Raphael did leave Liliana a way out. If she was to trick Azagoth by breaking his spying glass and stealing his chronoglass (which allows time travel to those who have the ability) in the span of one month, she would be allowed to return to Heaven.

The deal was made and Liliana arrived in Azagoth's realm. Dressed in a pristine white gown she found herself in a dreary strange place.

Except that after she mated the Grim Freaking Reaper, she’d be stuck in his realm, which, by all accounts, was a shadowy, dreary place that resembled Athens—if Athens was drenched in darkness, overrun by creepy demon things, and had been decorated via an unholy alliance between Guillermo del Toro and Anne Rice.

Azagoth struck her as a prick and an arrogant asshole with the way he behaved towards her and his son afterwards. She believed everything that was said about him to be true. And Azagoth wasn't fooled by her either. He knew she didn't really want to be here. He guessed she was offered pretty much the same "choice" he had. That is how Heaven worked. He is determined to get to the bottom of her decision.

Their first encounter was a work of art...

“I was hoping we’d have time to get to know each other,” she said crisply, “but I’ll deal. Touch me without my consent, however, and you’ll lose an arm.” So, fight over flight. And probably a touch of hate. He liked her spirit.
She needed to work on her threats, however. “Never threaten someone with losing a limb when you can go gorier. Try this next time: Touch me without my consent and I’ll gut you with my teeth and then strangle you with your own intestines.” He imagined her saying that, and his pants grew uncomfortably tight. “See how much better that sounds?”

From there on, they had ups and downs, both with their agendas and inability to fully open to one another or put their trust in the other. But everything in this world has good and bad periods. Nothing is always perfect. Their relationship started as an arranged mating but what came out of it was glorious. The path to that glory was thorny and oily and misty and whatever you want to call it. It was worth it, though.

Oh. My. Goodness. It's really hard to put some coherent sentences down. Azagoth is literally death and sex on legs. He is a kind of a god. A god that would swoon any and every female (angel/demon/human/unknown) head and heart and made them his slaves. I mean, how could those irritant angels look down on him and not enjoy their encounter (sex) with death/sex god? Impossible, they must have been lying or they were ashamed to admit it. Something. Anything.

I really felt bad for the guy. Yes, he had a lot of sex. But seriously, it gets boring during a few thousand years. Never anything more? Just sex and be on your merry way. With angels he knew the agenda, they wanted little warrior kids. With demons there were other things like fame (weeee, I had sex with Grim Reaper) or some kind of favours. No one ever wanted him for him. And no one ever stayed. Fucking hell.

He really did take it way longer than any normal being could have. Until he finally snapped. No more being a whore for Heaven and more kids that he would never see again. He was finito with everything. He wanted someone, though. Someone just for him. Someone that would break his ice and melt his heart. Awwwww....

I do think he got way more than he could ever dreamed of. It didn't start off as it should and it sure as hell wasn't progressing perfectly but it was progressing. And when there is will, there is a way.

Gah, I read this book in one sitting, all the while drooling while fanning myself while laughing hysterically... You'll see what I mean.

“What happened? You seemed so relaxed and happy when we were in the desert, like you were a normal person and not the Grim Reaper. Now you’re extra...reapy.” She cleared her throat. “Also, you’ve sprouted horns.”
Of course he had. She eyed him like he was a rabid hellhound, and when her gaze dropped to his feet, he barked, “What are you doing?”
“Checking for hooves.” He was pretty sure his horns grew larger. So did his dick.

The author, Larissa Ione, perfected combining steamy erotica with a shitload of humor. I mean, she makes me laugh while my cheeks grow redder by the second. It's hard to explain the combination of emotions and states you go through while reading her works.

Even the embarrassment, it is so vividly portrayed that you start panicking like it was happening to you in this very instance. It's at the same time, awesome and awful. I love the combination.

The characters are great. Azagoth was way hotter and menacingly more beautiful than Liliana (to me) but she was a good pair to him. Someone warm, stabilizing and spirited. She brought life to Sheoul-gra after many many centuries. The girl deserves a medal.

But let's not sink into despair. We have two more characters from this novella we can use for more works. There is a certain Soul-Keeper called Hades with his blue mohawk and Zhubaal, Azagoth's right hand man. They are both dangerous, borderline evil, alone and perfect to use as our next drooling sequence.

Everything in this book was done right. The romance that slowly build up and grew into the love of a century (or more, fingers crossed). The characters that started as half filled shells and ended up as fully evolved (emotionally and psychically) beings. The storyline which took us from Heaven to Sheoul-gra, from the deserts of Egypt to the ice of the Arctic. The setting. The humour. The family connections. The doubts, the distrust, the lack of emotion... everything. And it is one of the best books by this author out there. Thumbs up.

“There’s good and bad in everyone, Lilliana. Some just have to work harder than others to overcome their nature.”