It's an end to a very interesting but also not-what-I-expected series. 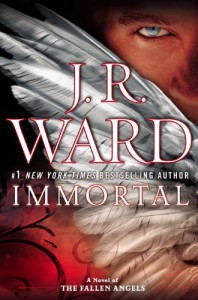 „Joy was worn like a new suit of clothes on people. You could see it on every inch of them, from their step to their stare. But sadness and loss were hidden, kept quiet under composure and the shelter of daily activity.“

Let me start by explaining the title of my review.

When I first heard about the new series J.R.Ward was putting out, I immediately thought it was going to be another turbo awesome paranormal series like her "Black Dagger Brotherhood" and I was extremely happy to see some new characters in a new setting done by the unique style of writing which has put J.R.Ward at the top of the paranormal romance lists of bestsellers.

Imagine my surprise when I started devouring the first book and realized how most of the characters were normal aka humans. Sure, there were angels and demons but the main character and the souls he had to win over were unmistakeably human. I have to admit that I was kinda disappointed by that revelation. I worship J.R.Ward, she is one of my all time favorite authors so I was literally ashamed when I realized how I started to dislike the book from the beginning, without giving it a proper chance, just because it lacked - well, let's face it - vampires.

I did read the first book, and the second and every other since then. I've read them not because the author was a goddess of the written word but because they really were that good.

The books are somewhat groundbreaking in their genre. It is difficult to put them in any of the established genres.

The idea of the war going on between heaven and hell set up by the Creator of everything himself is somewhat understandable. But, deciding the fate of the world and all of humanity as well as angels and demons on one human soul is - mad.

That is why this book transcends the usual action / drama associated with ex military type like Jim Heron and the usual bickering amongst demons and angels that has been going down since the creation of the universe. It is more than all that. It is everything. Everything is included in the story and everything is at stake. And we are all pawns in Creator's hands.

The review of "Immortal".

„It was so funny, Jim would later reflect. The heart, as it turned out, could break in a million different ways: It didn’t have to be a loss or a death. No, the inability to help someone you loved was shattering.“

Jim Heron is in a tough spot. He is the savior. He is the only one who can save mankind and angels along with all the souls that reside on Heaven aka the Manse of Souls. But he is also just a human with feelings and memories and traumas just like everyone else. He isn't above all that mundane stuff. And yet, he has to win the last two rounds in a battle for souls or everyone and everything is going to Hell, or to be more accurate, the Hell is coming to them.

Jim lives temporarily with Sissy Barten and an angel called Adrian in an old mansion. His other buddy Eddie is still in a coma-like stasis placed in the attic. The archangels who look after Jim and are supposed to guide him are in shambles after archangel Nigel took his own life after Jim handed a flag over to the demon Devina for Sissy's soul to be released from Hell. So, all in all, everything is screwed. Not to mention that Sissy did got released from Hell but she isn't as she used to be. Anger and hatred are taking over her and she is slowly giving in to them.

So, not only is Jim drained and tired, not only is Ad crippled and broken over Eddie's death, not only are archangels mad and in mourning over Nigel's suicide, not only is Devina stronger and deviant as ever, but Jim now has to deal with his own feelings - the romantic ones. Go figure.

The fight goes on, with everyone discouraged, exhausted, manipulated, hopeless and enraged. And there is still two more rounds to go on. It's an almost impossible situation. But the cards were dealt and they have to suck it up and play the game until the finish.

I was surprised when I saw that this book will be the last one in the Series, with two more rounds to go on and Eddie dead, Nigel in Purgatory, Devina in full swing, Ad crippled and Sissy tainted. With so much stuff going on and only three hundred pages of the book before me, I really thought there will be one more to follow. But no, everything was boxed into this one. And that is why I gave it four stars. And because of Devina. But we'll get to that one.

So, Jim. What to say but damn, when is he going to learn that this game is played dirty? The angels must obey the rules while the demons have free reign. He should have learned that by now. That rules only exist for the "good" side and that he has to expect the unexpected from Devina. But no. He still thinks he can play with fire and not get burnt and that he can manipulate Devina. Right. Anyway, Jim is a character I wasn't impressed with since the beginning. I understand that he was chosen by both sides because he has a little good and a little evil in him. But he is just so... slow. On the other hand, Eddie and Adrian are great. They really are. Smart, capable, warriors, friends (more than friends?), likeable, down-to-earth. While Jim bitches about how Devina plays around the rules, these boys had to clean his messes up. Repeatedly.

The archangels are pain in everyone's ass. Nigel and Colin are sarcastic arrogant divas. Whereas the other two are as insignificant as innocent bystanders on the street. To point that out, I can't even recall their names because the only time they are mentioned is when it is time for tea and they idly seat around the table in front of the Manse of Souls (I think it's Bertie and sth).

Sissy. My goodness, where would we be without an innocent perfect looking with no makeup blonde who acts like a child most of the time. I don't really care for Sissy but it figures that Jim would be interested in someone like her. He who was in the military, a hitman for the government, and who is now dealing with demons and some dark shit, is attracted to a blonde innocent virgin. Because, yeah, that's how the world works.

"Sissy shook her head. “So you know about his girlfriend, or fuck buddy, or whatever she is. You know what he was doing last night.”

“That is a Facebook status. Not an excuse for screwing around on your job. Especially given the biblical stakes he’s playing for.”"

Devina. The best character in this Series. I think she is the most original and the most troubled of them all. She was created evil. That is in her nature. She can't escape her fate. And she knows it. But she is still trying to understand it and learn from it. She is a demon and she is fighting to bring Hell on earth and she is a major bitch, don't get me wrong. But when you look at her more closely and really see what she's going through, it kinda wavers your hatred towards her. She is collecting things, she has OCD, she has trouble with accepting herself as she is, she gives everything on the outside appearance because she knows no one will like what is inside. She goes to therapy because she has no one, no friends, no one close to her, no one to confide in. She is... lost. Created this way and yet she wants so much that doesn't go with her nature.

"When your man went home to another, retail therapy was the only way to go."

And that is true for her. As for many women. When they are emotionally distressed and they have no one to talk to, they go shopping. They buy things because that will fill that void. And Devina shows that emotion. Shows us that gap that shouldn't be there given her nature. She doubts herself and she wants to be loved. Human feelings, aren't they? And that is why she is closest to the idea of a human with a delicate, easily-wounded nature. Creator created Devina just like he created the virgin Sissy and the archangels. He made her and he loves her for who she is. And she understood that in the last book. She understood that when she realized who her therapist was. The problem was that she realized that she shouldn't pretend she was someone else and always put the perfect mask on, a little too late.

One thing I do regret is that we spent too much time on Devina's reflecting on her feelings and her pointless problems like which shoes to buy. It was too much of her therapy shown. It became annoying because I understood her struggles and her ideas in the earlier books already so there was no need to give so much time to that in the last book.

The story directly continues where the previous book left off. The difference in this book is that it isn't as action-packed as the rest of them. This book plays more with deep emotions and heavy traumas as well as an idea of the world ending. The action was a mere side-effect. But it worked. It worked very well. Even though I hear some complaining on the touchy-feely indecisive moments the book is filled with, I think it's the perfect ending for this series. I did expect a different one. A lot of people expected a different ending. But this unexpected, provoking and most-fitting ending was the right way to go. Right way for the world and the best way for Jim and Sissy.

J.R.Ward is amazing. Her writing is unparalleled. This Series is different from everything she has ever done. But one thing that stayed the same is her dark, sarcastic and straightforward humor. I absolutely love it. I laugh out loud throughout her works.

“I liked watching you sleep.”

The blush that hit her cheeks ran all the way down her body. “It was the sherry. I’m not a big drinker.”

“I got no regrets.” He moved a strand of her hair out of the way. “How you feeling?”

As Jim coughed like someone had goosed him in the ass, she had to laugh. “Sorry. I’m into being honest.”

Thank you, J.R.Ward, for making this world a better place.