Awwww... lovers misunderstandings full of ups and downs and a good humor to perk everything up! 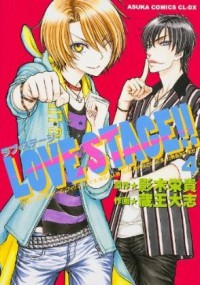 And we finally have fully fledged lovers who admit their feelings and their cravings despite all the odds. But do we?

Ryouma has been on the set far away for a couple of weeks after that steamy night and now that he's coming back, Izumi should be jumping from happiness but instead he is all gloomy and worried. And when Ryouma wants to go out with Izumi, Izumi tells Rei to drop that fact in front of Shougo because he knows that Shougo will insist on coming with them no matter what.

And so he did. Izumi, Ryouma, Shougo and Rei are together in an amusement park. Shougo is so glued on Ryouma that it becomes a little bit too much at one point when Ryouma remarks:

"Man... he's got me in his sights. If this keeps up, this day's gonna wind up having been SHOUGO'S and my date...! I've seriously gotta do something."

Ryouma succeeded in doing something to get Izumi away and alone. But Izumi wiggled out of it. And said something that hurt Ryouma really bad, he told him why he was avoiding being alone with him. After that conversation, Ryouma didn't call or text Izumi for a week.

So, Izumi goes to Ryouma's to discuss the fact who is gonna be the "uke" and who the "seme" in their relationship. Thankfully, they managed to... work... it out pretty satisfactory on both sides.

No one knew that this was the calm before the storm...

Namely, one day Rei got an offer to have Izumi star in one of the tv drama's directed by Kisaragi Jin. He was a huge name in showbiz, a man who made stars and a man who made Ryouma's career flourish. And since Izumi has been doing only commercials so far, this was the perfect chance to get him into the real deal. So, Rei accepted before asking Izumi.

Izumi didn't have a problem with it since he admires Kisaragi Jin but Ryouma felt differently. Apparently, Kisaragi Jin is famous for being too touchy with his actors and even Ryouma stated how he had to put up with his sexual harassment endlessly... But it's too late now, the contract was signed.

The only thing Ryouma could do was agree on being in the same tv drama to try and protect Izumi even though his schedule was already overbooked. But because of his overbooked schedule he can't be with Izumi often so he asked Rei to watch over Izumi for him. And Rei was ultra awesome in this regard. Man, was he hot when he threatened Kisaragi Jin with that cold and terrifying attitude of his. Thadump.... brrrr... get it together :)

When Izumi found out he had to play three different roles as three different personalities of a one rich guy, he almost withdrew from the deal. And when the time for the first reading was near and Ryouma was nowhere to be found, it was Jin who calmed Izumi's nerves with hypnotizing him (only faked it) and it worked because Izumi wanted it to work. The first reading went great and everyone was amazed with Izumi's pure talent in acting.

But when Ryouma saw how close Jin and Izumi were he was furious. Even after telling him what that man does to his actors he still becomes close with him. It was just a beginning though... What Ryouma never realized was that Jin was really behaving this time around because he was in fear of his life since Izumi never left Rei's sight.

And that's how all the great misunderstandings and lovers quarrels start.

Ryouma forbade Izumi from getting close and friendly with Jin which Izumi didn't take lightly. No one forbids him from doing anything because he is nobody's property... The misunderstanding evolved into a fight which continued for a while due to the packed schedule and different obligations they had. When first shooting started, Ryouma was floored by Izumi's excellent and natural acting. He almost lost it, the fight and Izumi's sparkle was overwhelming for Ryouma...

And then the worst thing happened...

Jin used hypnosis on Ryouma to get his act together and to forget everything that was troubling him.

And the one thing Ryouma forgot was - Izumi.


Gyah... turmoil indeed... what will happen now that Ryouma doesn't remember Izumi and being in love with him for the last decade. Not to mention, he thinks he's straight, being with a guy disgusts him. Aaaaaa.... noooooo.... not gonna happen. A-a, I believe in Eiki Eiki. Everything will work out.

I gotta say I hate Jin. He is one of those conceited guys who have natural talent and abuse it for their own evil purposes. He wouldn't mind doing Izumi even if he would be a minor, I'm sure. And if it wasn't for Rei, Izumi would be already molested with his weak attitude.

Ryouma on the other hand, went wrong about this problem. He shouldn't have put an ultimatum on poor Izumi like that. Of course he would be upset. But I understand why he was so straightforward and stubborn. He struggled as a teenager with no one of his own to look after him with this guy. And he suffered through a lot so he's a bit subjective about this problem.

It's a great sequel to an awesome manga, the only little, tiny issue I had with it was that there wasn't enough of Izumi/Ryouma and Shougo/Rei relationship progress. But it will be in the sequel, I'm sure.

I can hardly wait for the next installment.